Home » Motorcycle Maintenance » Motorbike Exhaust Upgrades: What Do They Do?

Motorbike Exhaust Upgrades: What Do They Do? 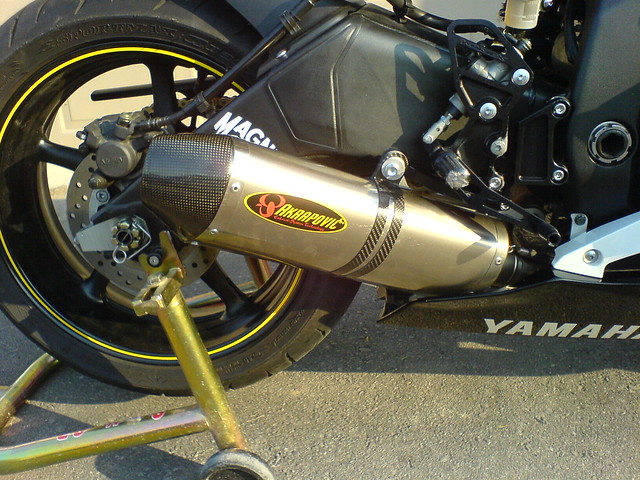 The urge to tinker about with things is rooted deeply in the human spirit, and probably has been since the first caveman picked up his first rock, and decided to start chipping away at it until he’d made it into a slightly better rock. The difference, these days, is that we have a wider range of things with which to tinker about, and motorcycles are one of the most rewarding. The thrill of passing your motorbike test and being – effectively – handed the limitless freedom of the open road by Her Majesty’s Government is enhanced greatly by the realisation that you can start making upgrades (or, more accurately, “potentially catastrophic alterations”) to your bike. And the exhaust is a great place to start.

Do Not Fear Change

There are three good reasons to consider upgrading your exhaust, and at least one bad one. These are:

As you may have guessed, the fourth one is the bad reason, simply because it means you’ll be spending money without knowing if any of the first three will actually happen. Hopefully, by the end of this post, you’ll have at least an idea of how to make an exhaust upgrade worthwhile.

The first thing to realise is that, when people talk about exhaust upgrades, they’re almost always only talking about the end can – the big shiny bit at the back where the gases come out. Making your bike look better by changing the end can is relatively easy, and a variety of companies make cans that should fit your bike, giving you a machine that looks a little bit less like the standard model. It’s important to realise that doing this will not necessarily give you bucketloads of extra power, or indeed make your bike sound like a panther with a grievance.

Next – power. In fact, many end cans will provide at least a small boost in the horsepower that you get from the bike, though most people won’t notice a typical 1hp increase when riding a 65hp bike. One potential gain is provided by the use of lighter materials in the manufacture of the end can; any loss of weight means an increase in acceleration, for example. In order to get the most, power-wise, from an upgrade, you’ll need to have your engine tinkered with as well, to match the air/fuel mix to the new unit. This is best accomplished by a pro, so think carefully about the reasons you’re upgrading before you get your credit card out.

Making a “better” noise is our third “sensible” reason to upgrade (depending on how you define the words “better” and “sensible”.) Many newer bikes these days are relatively quiet, and there’s a good argument to be made that this affects safety. If it’s important to be seen, by both drivers and pedestrians, when you’re riding, surely it’s as important to be heard? In reality, most replacement cans will improve the sound of most bikes, but the range available is so large that the best way to find out is often to find someone who’s already fitted your favoured upgrade to a similar bike. There are, of course, possible legal implications to altering the noise that your bike makes, so before you buy, make sure that the whole set-up is going to allow you to ride without undue attention from the constabulary.

This entry was posted on Thursday, November 19th, 2015 at 7:17 am and is filed under Motorcycle Maintenance, Motorcycle Tips, Motorcycles & The Law, You & Your Motorcycle. You can follow any comments to this entry through the RSS 2.0 feed. Both comments and pings are currently closed.